“Acquiring the appropriate skills for voluntarily controlling unwanted anxiety and arousal is an important part of developing your mental game plan. These skills will enable you to reduce arousal levels when you’re feeling over-anxious and to increase arousal when you’re not feeling pumped up enough.” Stephen J. Bull – The Mental Game Plan

Athletes speak of the need to stay ‘in the Zone’ when competing. By this they mean maintaining precisely the right amount of arousal. One in which thanks to enhanced alertness, motivation, energy and focus they are able to perform at the absolute peak of their abilities. The good news is that, by mastering some fairly simple procedures, you can control your levels of arousal and remain within your ‘Zone’ of peak performance no matter how daunting the challenge.

Research by Finnish sports psychologist Yuri Hannin has established that to function at peak efficiency we must remain within what he terms our Zone of Optimal Performance or ZOOP. The illustration below shows how this Zone relates performance to varying levels of bodily and mental arousal. 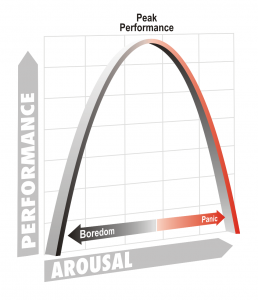 As you can see, success depends on achieving exactly the right level of mental and physical arousal for any particular challenge. Too little or too much risks producing a below par response that is characterised either by lack of motivation at one extreme and panic at the other. Only a small portion, right at the peak of the curve, is associated with peak performance – what sportspeople term being ‘in the Zone’. Low levels of mental and physical arousal undermine our performance because we lack the necessary motivation and drive to achieve the goal. We feel too laid back or indifferent to the outcome to try our best. The further to the left of the curve we move the less able we are of achieving a desired outcome.

If we move too far to the right of the ZOOP, however, we become overly anxious and agitated to perform at our best. The further we drift in this direction the more rapidly our performance declines as anxiety turns into panic.

While we remain within our ZOOP we are able to perform at the best of our ability, experience and training. We approach challenges positively and with a very high confidence of success.

We remain so clearly focused and free from self-doubt that our performance itself seems almost effortless and the outcome frequently exceeds our most optimistic expectations. Later we may describe ourselves as having been “on peak form” and explain it away by saying: “everything just clicked” or “I really got my act together.”

We may also wonder, perhaps slightly forlornly, why these moments of peak accomplishment are so few and far apart.

Wouldn’t it be great, we may think sadly, if only I could always perform as well as that when it really mattered!

The good news is that we all have it within ourselves to do just that. In this blog I will explain how to identify when you are in your ZOOP for any particular task. In a later blog I will tell you how either to move into this Zone or to remain within it by using the power of your breath alone. If you would like to know more right away then click here {LINK to Bo-Tau Relaxing Breath}

It is important to understand that we each of us have our own personal ZOOP and that this varies depending on the nature of the task or challenge we are facing.

Some people need a lower or higher level of arousal than others to function at the peak of their ability. Certain tasks, such as those demanding high levels of mental or physical dexterity are typically carried out most efficiently at levels of arousal lower than those needed for routine tasks.

At this point, I’d like you to stop reading and think back over three recent activities. First recall an occasion in which you failed to function at your optimum because you were insufficiently motivated. In other words too far to the left of the graph. Reflect on your feelings as well as on your performance. Were you bored, apathetic, disinterested, or tired? How did these negative feelings affect things such as concentration, hand-eye co- ordination, creativity, problem solving skills, persistence, mental focus and so on. If you were listening to your inner voice what sort of things was it saying to you? Copy the curve shown above and place an “X” on the line approximating to your level of performance under those circumstances. The position of this mark on the performance curve also shows your likely level of physical and mental arousal on that occasion.

Now recall an occasion when you failed to achieve your true potential because you were too far over on the right of the curve. As before reflect on your emotions in that situation. Were you overly apprehensive, anxious, fearful or panicky? How did these negative emotions affect your performance? Did your self-confidence take a knock? Did you find it impossible to stay focused, to concentrate and recover from a setback? If you heard an inner voice, what was it saying to you? Draw an “X” on the graph to indicate your level of performance.

Finally consider a time when everything really clicked and you performed at the peak of your true potential. As in the previous two instances, try and remember how you felt emotionally, intellectually and physically? Reflect also on what your inner voice was saying at the moment of triumph. Were the words coming into your mind entirely positive – ‘Yes! I can really crack this…’ or tinged with self-doubt. As before mark this point on the curve.

This exercise is helpful because it helps to bring into the forefront of your mind both the negative and positive consequences that follow from differing levels of arousal.

As you seek to enhance your performance or sustain an already high level of achievement when faced by that particular challenge use Sensualisation and Breathing techniques to assist you.